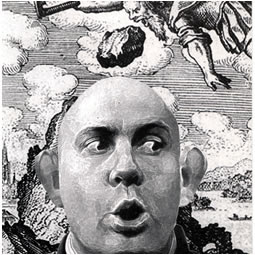 Chocolate Monkey is a one-man show written and performed by John-Paul Hussey, and presented by Store Room Workshop Theatre in association with The Amazing Business.

The production is the first in a series of three connected works (the others being Spacemunki and Love Monkey, which will show as part of the Full Tilt program at the Arts Centre later this year) in which Hussey’s remarkable facility for accents, storytelling and comic timing is given free reign.

Chocolate Monkey is an intensely personal work, in which the autobiography of this Zambian-born son of Irish parents is prodded, poked and turned inside out for our entertainment. At its heart, it is an often-hilarious, stream-of-consciousness journey through Hussey’s life, taking in everything from a job spent measuring Melbourne’s railways to the Kevin Costner film Field of Dreams, incorporating interdependency, Maori bouncers and kinder surprises along the way.

Restrained but effective video projection, and a rich sound design by the award-winning Kelly Ryall further enrich the production.

The twists and turns of the narrative replicate the way one's own thought processes leap from subject to subject in an almost random way, although I can only wish that my own internal monologues possessed the mordant humour enriching Hussey's tales. His charisma and comic timing carry the show along in such a way that one barely notices the occasional flat spot, although as a whole, Chocolate Monkey could definitely stand to lose approximately 10-15 minutes from its running time.

I was definitely entertained by this production, but I came away from the evening not entirely convinced by what I had seen. Like a dream on waking, the substance of the show seemed to slip away almost as soon as it was over.

Fellow blogger Alison Croggon wrote that, “In a sense that is not dishonourable, it seems curiously pointless: [Hussey] takes the risk of permitting the piece to be, like life itself, unclear, complex, full of loose ends and, in the end, resistant to interpretation.” Croggon also notes that she looks forward to seeing how Hussey’s writing skills develop in the next two shows in his Monkey trilogy.

I’ll second that motion, with gusto.

Posted by richardwatts at 10:01 pm